Is your food healthy and safe? Ask your own nutritionist —new ‘smart chopsticks’

Smart tech is a new term for tech that connects to the Internet or communicates machine-to-machine. It has a rapid development these years, from heating our homes, leading people to recycling now to keep a watchful eye on people’s daily lives. Recently, Chinese search engine Baidu has created chopsticks (known as “Kuaisou” in Chinese) -that can detect whether the food is safe to eat (The guardian, 2014).

How does it work? 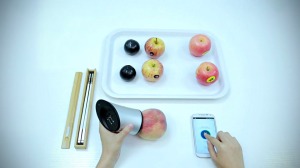 In early Spring of 2014, this idea of the device was born of an April Fool video in China, but then it generates lots of excitement that encourages this joke idea to become a reality.

The version 1.0 pair of smart chopsticks was revealed in the beginning of September 2014, it runs alongside a smartphone app to judge the freshness of the oil used for cooking, when you placed the chopsticks in three cups of cooking oil, sensors attached inside are able to tell the temperature, PH levels and also calories. If the oil is not fresh, the chopsticks flash a red light.

Although now this idea is not being commercially produced yet, it can give rise to the public concerns since it is a marvelous example of how technology can be used for the power of food—not just making our lives more convenient, but actually leading people a safe life. It detects any anomalies within their food in such fast, easy and averagely accurate manner that everyone can use/check it.

It is said that China has the largest market for this product because of the severity of food safety, specifically the food threats such as pork spray painted red to make it beef or food coated in paint can be solved. Even in Europe there are also food scandals such as poisonous cooking oil, dioxin laced chickens, which can be solved by this technology. In addition, the intelligent part of it is not chopstick itself but the sensor implemented inside. That good idea can later on also be used in folks or knives as a smart device.

However, I am considering that will this technology be over-sensitive, if all people turn to care more about the detailed food elements since they start to use the chopsticks to check, will it be a kind of risk that people are afraid of eating some food which should have be fine to be eaten but get bad results through this pair of chopsticks? Then can people still enjoy the food? Moreover, whether and how to make this tech go into commercial production? As the development is still in its first stage, the company just made only a few limited run of prototypes, there is no exact release date or a pre-set price for that. We will see how Baidu define its international market in the near future.

The Guardian, 2014. China launches chopsticks that tell you if your food is safe to eat. [online] Available at: <http://www.theguardian.com/world/2014/sep/04/baidu-china-search-engine-smart-chopsticks-food-safety> %5BAccessed 26 September 2014]