What Language Will the Internet of Things Speak?

The Internet of the future will be heavily shaped by a few key trends, from hybrid and personal clouds, to new visualization and analytics techniques that will solve challenges in the domain of Big Data. But perhaps most noteworthy of all is the expectation that new companies and applications will realize the concept of an Internet of Things.

By 2020, the global internet will have 100-billion connected devices. But no longer will the majority of these devices be comprised of computers and smartphones. Instead the future envisions a web of connected washing machines, fridges and vacuum cleaners.

Companies such as Microsoft and Cisco have heavily invested in projects related to bringing the Internet of Things into fruition. They have partnered with key institutions such as the Industrial Internet Consortium and the Allseen Alliance, both dedicated to standardizing how things will connect and communicate.

Today the Internet of Things is a far away prospect in its infantile stages of conception. We see more and more devices becoming connected, such as TV’s and Alarm Systems, but connectivity on an industrial scale is lacking. One of the primary causes of this predicament stems from the lack of a common, industrially-applicable framework for the connection and communication of the myriad of ‘things’.

Allseen Alliance has released AllJoyn, a free software originally created by Quacomm but given to the Allseen Alliance for further development. It is designed to operate in any device, regardless of the manufacturer or operating system, and mediate direct communication via wireless linkages (i.e. Wifi or Bluetooth). The basic idea being that objects broadcast what they can do in the immediate vicinity. Ideally, upon entry into a defined space, your future smartwatch should be able to access and command all connected devices located therein. 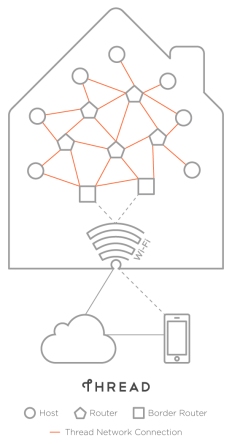 The Thread Group, supported by Samsung, ARM and Google’s NEST has another perspective on how the framework for the Internet of Things should look like. Most notably, Thread explicitly distinguishes itself from being ‘just another standards body’ and bases its framework on existing standards and adds software for functions like security, routing and setup. According to the group this is imperative to minimize battery usage in devices which will have to deal with a multitude of active, broadcasting devices. Thread’s de facto sponsorship of the Bluetooth Smart brand has allowed it to capitalize early on the Internet of Things, as do its partnerships with Google and Samsung.

As the horizon draws near, companies are rushing to create the foundations of an increasingly connected global economy. The Internet of Things represents only one of the trends we expect to be realized in our lifetimes but it is taking measurable strides, being driven by a host of companies and interest groups representing a broad and diverse range of potential users. An environment of near total connectivity brings forth many challenges that will have to be confronted in the economic, social and ethical domains. Luckily, all efforts to develop a framework for the Internet of Things are open, exemplifying the level of collaboration and farsightedness that will be necessary in this awesome undertaking.