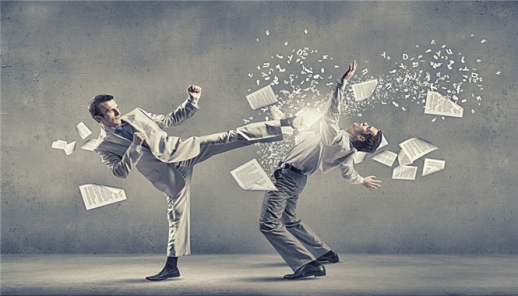 Grab your popcorn and take a seat. We might have another Silicon Valley tech feud on our hands. This time it’s Tesla vs. Apple. There have been rumors circulating for a long time that Apple is working on a self-driving car. After reports that Apple was poaching key automotive talents from Tesla, Musk told the German business newspaper Handelsblatt: “If you don’t make it at Tesla, you go work at Apple.” The Tesla CEO went on to say “They have hired people we’ve fired. ”We always jokingly call Apple the ‘Tesla graveyard.”’ When asked whether or not he took Apple seriously as a competitor in the automotive market, Musk replied, laughing: “Did you ever take a look at the Apple Watch?” He then chuckled.

This is a classic Goliath vs. David scenario. Some believe Musk is simply jealous, since the Apple Watch made more profit in three months than Tesla will in 2015. Musk has already taken a step back, as he tweeted that he doesn’t hate Apple and that he thinks it’s a great company with a lot of talented people. He’s still not convinced about the Apple Watch, as he said ”the functionality isn’t compelling yet, by version 3, it will be.” The Apple watch will bring in $4.4 billion in revenue this year. This is not a grand number, since Apple will be good for $233 billion in revenue in total this year. However comparing it to Tesla, who’s expected to achieve around $5.4 billion in revenue, it is pretty big. Especially when looking at the profit margins on the Apple watch.

Both companies have a stellar reputations in the tech space. Yet, I do get the feeling that Musk is taking Apple lightly. He said: ”Cars are very complex compared to phones or smartwatches.” ”You can’t just go to a supplier like Foxconn and say: Build me a car.” Although he has a point, one should never count Apple out. Over the past decade or so, Apple has been very successful at fundamentally reshaping the personal-computing industry.

You’d think that the car industry is very different from the personal computing market (notebooks and phones), however Tesla’s processor supplier NVIDIA stated earlier that cars are basically supercomputers that require ”parallel processing, extensive software based architectures, and deep learning technology.” Then all of a sudden it makes a lot of sense that Apple wants a piece of the automotive market. Looking at Apple’s track record of building game changing computing devices, one should not underestimate them.

Apple has not yet responded to Musk’s comments. If Steve Jobs were still CEO at Apple this could have been very different, as he was never one to mince words. He used to be feared and famous for his tech-feuds. Jobs vs. Adobe Flash, Jobs vs. RIM, Jobs vs. John Sculley, Steve Jobs vs. IBM and of course Jobs vs. Microsoft/Bill Gates, to name a few. Apple does not shy away from taking off its gloves, as can be seen during the more recent feud between Apple and Samsung, filled with all kinds of legal assault. 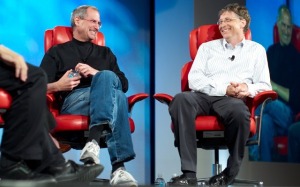 But let’s not get too carried away. After all, Musk has already apologised in his own way and Apple is still far away from becoming a direct competitor of Tesla. Even if they do clash, the car market is not a clear winner takes all market, so there should be room for Apple and Tesla to coexist. Right now, Tesla has other things to worry about, as its stock has dropped 11.3% in the last three months.

If you liked this blogpost and want to read more about tech feuds, check out this link: The 10 Best Tech Rivalries of All Time.

One response to “New tech rivalry at hand?”